It's been a wonderful first year of authoring. I've felt such an outpouring of love and support. Thank you so much to my readers!

It's hard for me to believe, but over the past year, I've officially published 7 books! Three are children's picture books, and four are chapter books or novellas. Three are for children under the age of 5, three are for middle-grade readers (ages 7 to 12), and one is a young adult novella. This post features each book in chronological order of when they were published. So far, my chapter books and novella have only received five star reviews. It's so surreal, and I'm so grateful to be on this journey!

After becoming a mother and choosing to stay home, I searched for an outlet of some kind to help me have balance in life. I'm so grateful to feel like I've finally found my groove! Being a stay-home mother while also writing, designing, formatting, and publishing books has given me the balance I was craving.

Here is some inside info about these special books! (I've included links to each book on Amazon. To go to the amazon page just click on the underlined title of the book.)

The first book I ever published was Luna's Rescue! It was officially published at the beginning of September in 2020. This book has a special place in my heart because it taught me to believe in myself. It proved to me that I could be an author. I felt so insecure (and excited) to put this book out into the world and share it with readers. The reception has been so wonderful! I've had  many young readers devour this book in one sitting. I've had readers tell me it's their new favorite book! I've had a retired elementary school teacher tell me it's the book she was always searching for to have in her classroom. I've visited two schools (one virtually and one in person) to share this book. The kids enjoyed meeting Luna the gecko in person and virtually. I've even had a  teacher read this book aloud to her fifth-grade class! Another exciting happening was connecting with Caleb Summers, who produced the audiobook versions of both Luna's Rescue and Hoover's Horn! I had my first book signing in April of 2021 and have been selling copies of Luna's Rescue in a local bookshop and at local farmer's market events. I love meeting readers and sharing my books! 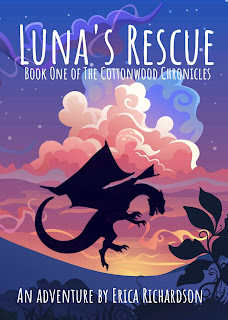 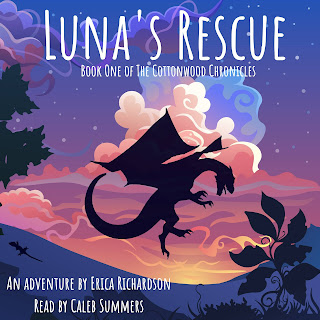 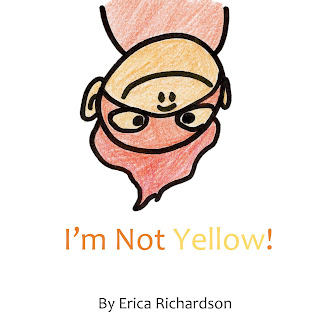 The next book I published was released towards the end of November 2020. Lisa's Ugly Glasses is significant and meaningful to me. It tells the story of a young girl who is painfully shy and the lessons she learns that change her life for the better. In a way it's my own story, but I've also been told by readers both young and old that it is their story too. Lisa's Ugly Glasses has received glowing reviews from readers ages 7 to 90.
Some fun background information is that Lisa's Ugly Glasses began years ago as a young adult spy novel. It was about a young woman who finds a pair of ugly glasses on a plane home from college. She soon discovers that the glasses are loaded with secret technology, leading her on a journey to find her long lost father. The story changed quite a bit, especially after writing Luna's Rescue and gaining confidence in writing for a younger audience.
Lisa's Ugly Glasses received a five star review from Readers' Favorite and now sports the shiny Readers' Favorite Five Stars sticker on its cover.
The audiobook version was produced by Stephanie Ellis, who did a wonderful job capturing Lisa's voice. 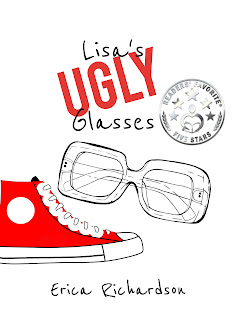 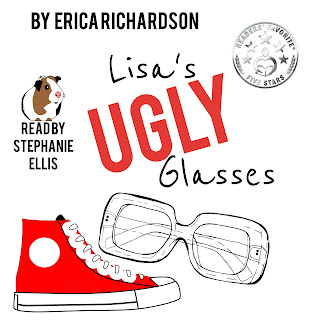 On October 1st of 2020 came Finley Fox: How to be a GREAT Princess. A few fun facts about Finley Fox:
Firstly, I quickly discovered that there are a LOT of books about foxes whose names start with the letter F. The main character's name was originally going to be Fifi Fox, but I discovered that name had already been used by another author and I wanted to respect their creativity by not using the same name.
Secondly, Finley Fox is my second best selling book, even though I've never advertised it!
I wrote Finley Fox out of a desire to create a princess book that focused on much more than physical appearance or a dainty, royal personality. My little girl was getting into the princess phase, and I wanted to contribute to the positive change happening with princess culture in the media.
I have done my own illustrations for each of my children's picture books so far. While I'm not a professional illustrator, I've found that children love the simple, fun, cute pictures and characters. 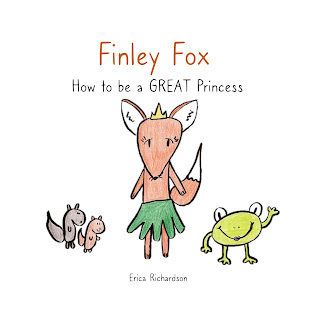 Hoover's Horn, the second book in the Cottonwood Chronicles, proved to be a challenge. I had all kinds of ideas for the storyline but absolutely no idea how to fit all the ideas together. After months of trudging through writing Hoover's Horn and taking long breaks from it, I had an official meeting with my critique partners. (In other words, my young relatives cornered me and asked if I'd written the second book yet. They then helped me with a major brainstorm session, and we finally made major breakthroughs with the story line!) After inspiration from my helpers, I got to work and finished the book. It was published in early March of 2021. Here's a little teaser: one of my young helpers loves crocodiles, and you'll see that in the book.
Caleb Summers did an amazing job on the audiobook. I just LOVE the voices and personalities he brought to the characters of Hoover's Horn. It's quite a thrilling adventure, and as a seasoned actor, Caleb really brings the story to life.
Hoover's Horn features a fun little character named Terracotta Glaze (or Cott for short). He's a charming garden gnome and may or may not have been inspired by my sister's and my garden accessory obsession. (I honestly can't remember which came first. But I'm pretty sure Cott came before the obsession since he comes from a reference from the first Cottonwood Chronicles book, Luna's Rescue.) 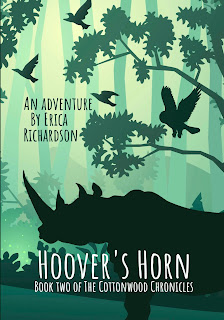 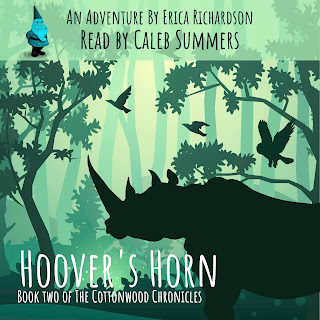 In early May, I was made aware that the Mother's Day gift I had planned for my mother was never going to make it to her (across the country!) in time! Ideas started forming in my mind, and I wrote and illustrated Every Mother Is Different to surprise her and my sister. This book came from deep inside my mother heart. I struggled for several years to "find my place" as a mother. I struggled (I'm using past tense, but that doesn't mean the struggles and feelings are over!) to feel like I fit in with other mothers. I struggled to feel like I was enough as a mother. I struggled with morality OCD, constantly analyzing and ruminating over the "right" way to mother my children. I remember a moment where a thought (which I believe came from God) entered my mind and taught me a lesson through animals. (After all, I am an avid animal lover. ...Actually, I'm completely obsessed.) The thought was this: Mothers in the animal kingdom are completely different from each other. Elephant mothers have only one or a few children over their lifetimes. Their mothering style is completely different than how a rabbit mother cares for her children. A rabbit will have many, many children throughout her lifetime. She will do everything in a different way than an elephant does or a bear does or a humpback whale does. Yet each mother gives their children what they need, and the variety and diversity of mothers in the animal kingdom is astounding and beautiful. I've come to believe that the same is true for human mothers. Our diversity and variety make the world beautiful. 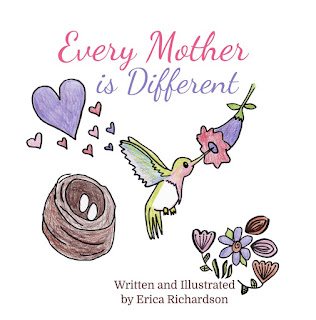 Lastly, I published Peregrine: a novella in August of this year (2021). This story explores living with mental illness in a raw and compassionate way. It is a reflection of my own experiences with mental illness. I wrote it after going through a few tough years, finally receiving my own diagnosis of OCD and Generalized Anxiety Disorder, and supporting close loved ones through panic attacks, anxiety, and depression. The story portrays how I hope we will each respond to those who are battling the invisible battles of mental illness. It portrays how deeply I care about these people and how I believe they are astonishingly courageous. I also hope it brings understanding and inspires readers to become more educated about the mental illnesses people in our world struggle with. It is a call for kindness, courage, and compassion. It is a reminder that kindness and friendship can literally save lives.
The Peregrine audiobook is currently in production. I've received such humbling reviews for this book, such as "Richardson truly is such a phenomenal writer, this story handles difficult subject matters and mental illness with empathy, compassion and education. I laughed and cried alongside Trisha and Miles, I felt so connected to the two main characters. This Young-Adult novella was gripping, powerful and such an important read!" and "The first few lines had me hooked, and I could not stop reading until I finished. The characters are so real and so relatable. Erica Richardson writes the characters in a way that makes you fall in love with them in the first few sentences. The plot is also so real and relatable. This story could be anyone's story." 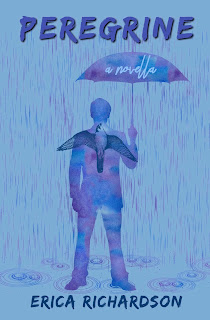 Thank you for reading! It's been a wonderful, humbling, and enabling journey. I've received so much help and support, especially from my loving Father in Heaven.
Current works in progress:
Snowy's Secret, book 3 of The Cottonwood Chronicles
The Whale Riders of Riff, a middle-grade fantasy adventure
The Quest for Everone, a young adult Christian fantasy
A Cat Named Miracle, a middle-grade novel about OCD
And perhaps a few others...

Popular posts from this blog

May 25, 2021
Anelthalien Book Tour  Today I'm excited to feature a YA Christian fantasy book by fellow author, HA Pruitt.  Anelthalien is in Utah! Can you see the Utah mountains in the background? If you look closely at the photo below, you’ll see a playground on either side of Anelthalien. You might also notice that my copy of Anelthalien is a bit worn! There’s even tape on a few of the corners. Why? Because this book traveled with me all over the place! It was always in my purse. When the kids fell asleep in the car, I’d pull it out and start to read. I’d read it at the playground. I’d read it wherever I happened to be when one of those precious moments of free time popped up.  Before reading it, I always heard “Have you ever wanted something different? Anelthalien is waiting.” When I read it, I realized how perfect that description is of this book. It is different. It transports you to a place you never could have imagined. And somehow through this foreign land and these 4 average-seeming te
Post a Comment
Read more